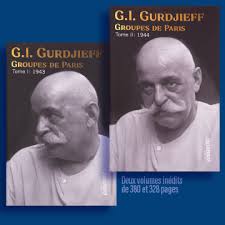 [The next question and answer are not in the English.]

Dr H.   What is the rule [critère] for changing their breed? It varies with all …

Mme de Salzmann:   Mr Gurdjieff has said that it depends on the village. The villages are constituted differently for some and for others.

[The transcript picks up.]

P.L.    I think there might be more dogs when the village is weak. Is that so?

Gurdjieff: The village might be weak because there are more dogs there to weaken it. Each dog has a name in the villages. I know all their names.

[Mr Gurdjieff jokes about the names of the dogs]

I once gave an exercise and I constate that no one has done it, and it has given results to no one. I will remind you, and perhaps there will be someone more intelligent who will understand and crystallise it. It is the exercise of filling the body. Perhaps someone remembers: “I am.” When it is “I” one receives the echo in all the body. Each of you understand what this sensation is.

But in this other exercise it is not a question of that.

The echo must be felt first in the right leg, then in the left leg, then the right arm, then the left., the abdomen, the thorax. This series, twice, then a third time add the head. Begin again if you have the time. Twice in these six places, and the third time in seven times.

P.L.   Should one listen for the breath over time? There is a tendency to do it with the breath.

Gurdjieff: Do not do it with the breath. That will give you the wrong tempo. Take the time that is necessary for respiration and for sensation. It will be your measure. You understand well: represent it to yourself, and then sense in your right leg, then change. Do not pay attention to the breathing. The tempo will establish itself. It depends on many things: tiredness, and other things. The respiration is nothing to do with it. Do not connect it with this exercise. (223)

A.D.   Should one consider each members as a whole, in one breath, or over several breaths for each member?

Gurdjieff: Each member in its entirety.

[I wonder whether Gurdjieff fully understood the question. He often refers to his limited understanding of French. A.D. has asked two questions here, but Gurdjieff only answers one. Perhaps the transcription of his reply was incomplete.]

Gurdjieff: Both. But “I” is independent. It is necessary to sense the echo in each leg. You say “I am.” But instead of sensing the echo of “I” throughout all the body, you sense it in the leg. Do this exercise quite independently of the exercise of filling. Once you have done it, you will do the filling better.

A.D.   Should one stop the sensation at the leg?

Robert Pomereu: Should we say it aloud?

Pomereu: One forgets the body?

Gurdjieff: No, you sense it as your head.

M.D.   Would it be better, instead of doing all the exercises, to only do this one for eight days, for example?

Gurdjieff: If it is more practical (commode) for you. I do not know your family situation, but these two exercises are good for you. The two exercises will allow you to truly begin. (224)

Gurdjieff: Leave it and take this. But keep one thing: the cold water.

M.D.   I do it very conscientiously.

(Mr Gurdjieff asks G.B. to come and speak with him after dinner.)

P.L.   I have constated two things: the ideas give me very strong feelings, but very often I see that the others have no idea, and I perceive that I have no feeling for them.

Gurdjieff: What is the question?

Gurdjieff: First, you must feel that there is a difference between idea and idea. For example, a madman has the idea that he is Napoleon or something grand like that. He has an idea. But what are the value of his ideas? If you have ideas, they are those of a fool, (but) one who possesses normal thought will see you for what you are; for him, your idea is not a real idea. But he has a real idea. You must understand this truth.

P.L.   I do not understand it very well.

Mme de Salzmann: Mr Gurdjieff means to say that you believe in your ideas. You believe that they are (real) ideas. You do not think that others, more normal, have true ideas.

Mme de Salzmann: And Mr Gurdjieff answers you that you have that emotion only if the idea is the same as your own.

Gurdjieff: A madman who believes that he is Napoleon loves those who believe him to be Napoleon. They understand each other, together they hold a convention. No, think impartially about one of your ideas. What is the quality of this idea? Why, with one person does it establish a desirable connection, but with others, an undesirable one? Make an impartial analysis. When you have material on the question, we will speak; and I will tell you many useful things. I have material on this question. In the course of my life I lived, for some fifteen years, in a madhouse in which there were four thousand madmen, the biggest asylum in the world, near Tashkent.

P.L.   I have had a realisation which brings me to ask you this question: how can I develop feeling?

Gurdjieff: Do what I tell you. That will awaken all the factors of your feeling, on condition that you are sincere, sincere with yourself, and that you make an impartial analysis.

P.L.   I don’t fully understand. An analysis of what?

Mme de Salzmann: Try to account to yourself, by an impartial analysis, of what makes a contact between yourself and others, and what does not. Analyse it sincerely for yourself.