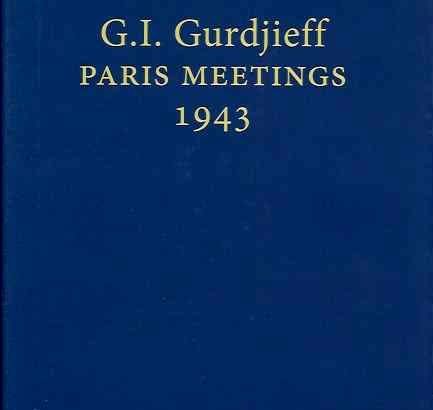 I received this notice today. It is shown in blue. I have not had a chance to check it, but the format of this index is better than the one I prepared. As stated, I have not checked it for accuracy.
DOLMEN MEADOW EDITIONS is happy to announce the availability of an index for this book. This index contains around 350 words with more than 2500 references.
This index may be downloaded from the Gurdjieff, Paris Meetings, 1943 order page on the DOLMEN MEADOW EDITIONS website. It is available without charge.
The Dolmen Meadow site also has this anonymous note:

An index to G.I. Gurdjieff Paris Meetings 1943 is now available and may be downloaded here.

The English edition of G.I. Gurdjieff Paris Meetings 1943, published by Dolmen press in 2017, is a translation of the original French notes taken during meeting in Gurdjieff’s Paris apartment. A French edition of the notes was not published until 2020. During the research for the French edition, it became evident that several passages in the original notes had been unclear or ambiguous; other versions of the notes were discovered often with handwritten corrections and modifications made by Jeanne de Salzmann; and the notes taken at a meeting in 1944 were erroneously included. Consequently, the 2017 English edition differs significantly from the 2020 French edition.