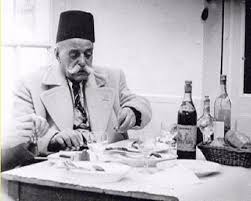 Some of this is so similar to advice Mr Adie gave me that either they both had it from Gurdjieff (as Mr Adie never met Orage), or else it was a case of great minds thinking alike. However, the fundamental insight is pure Gurdjieff. From Gurdjieff’s Emissary in New York, pp.431-2:
“A help to sleeplessness is to put your three centres at rest. The idea is that if during the day one centre had not had sufficient exercise to bring a comfortable sleep, that centre does not sleep soundly. If our centres are all equally exercised, their fatigue would be equal and our rest or sleep would be very sound. A deep sleep in this way restores us in a much shorter time. At the Institute four hours of deep sleep is considered sufficient. If your centres get fidgety at night and you cannot sleep, try the following: Put the instinctive centre to rest by complete relaxation, put the emotional centre to rest by making a mental picture of a scene or a situation which in some past time has produced a state of complete rest in you, the centre doesn’t know the difference between the picture it re-creates, and the reality and will react to the scene as it did before. Suggest to the intellectual centre by word and thought, that all is well with the world, put yourself, as it were, in the hands of God, this occupation will keep this centre at rest and assured.”
Once more, Book Studio has done us a service in making this material available. People who have worked with this have added the idea of going to sleep with the conscious intention of recovering from an energy during the night, and awakening refreshed. Some have had extraordinary results. In studying the state of hypnosis at the time of Gurdjieff’s youth, I have learnt that some people had found it possible to go to bed with the intention of getting up at a particular time, and finding that they invariably did so. If hypnosis was used, the results were even better. We don’t use hypnosis but we can consciously use suggestion.
And why limit it to leaping out of bed at a given time, or easing soreness? Why not also separate out our memories of the day from our emotional reactions to them, and go to bed with the intent of awakening with the resentment or disturbance harmonised?
This reminds me of Bennett’s statement that in the original preface to his book, which he eventually omitted, Ouspensky said “he had noticed, during the years he had been working with Gurdjieff, that those who attempted to put what they had learned into a formula and kept strictly to that formula ended up by having nothing at all. Only those who struggled to understand and saw all the time they would never reach finality; could never reach something which could be put into a formula – only those really kept the teaching alive in themselves. With unceasing struggle to find life in the teaching they were able to keep the process of transformation alive in themselves.” Who Is Man? 120-121.