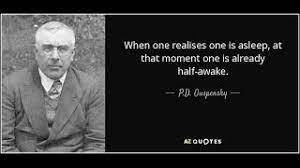 Readers should note that the book on Audible is titled “Psychological Lectures 1934-1940”. Searching for “The Psychology of Man’s Possible Evolution” will yield only a reading by DJ Holte.

At the outset I have to declare that I am a friend and colleague of Anthony Blake’s, the reader of Ouspensky’s The Psychology of Man’s Possible Evolution in a new recording available on Audible. In fact, the most important aspect of the J.G. Bennett project we are working on is precisely that he will set out in more detail, some of the thoughts and insights which have come to him concerning Bennett and his work, struck like sparks from the flint which he was.

However, although when I hear this recording, I am irresistibly reminded of the way my friend speaks, that alone would not have sustained me as I listened to the first half it in one sitting. It was ninety minutes, as it is only a three hour recording, but it was like a pleasant flight.

The reading is engrossing because each word of the text is given its full weight. The real star here is, of course, Gurdjieff who taught these ideas to Ouspensky. The lesser celestial light is Ouspensky, and Anthony points a finger to the ideas which they have illuminated.

A truly good reader does not impose himself on the material, but presents it. And yet, in that presentation, something of himself must necessarily appear: not merely his level of education, but his understanding, and his presence. There have been some truly great recordings: Cyril Cusack reading the poetry of G.M. Hopkins, and Ralph Coshaw reading Kipling’s Kim. But Cusack reading Yeats is not the same experience at all, because Hopkins was a greater poet than Yeats; and Coshaw reading about the Nuremburg trials is lesser because the material lacks the magic of Kim.

But now, the problem for most readers, no matter how accomplished, is that the higher the material they read, the more any lack of understanding in delivering that material will be evident.

That is, the material being read itself tests the reader and exposes his weaknesses. This is why it is so impressive that Anthony’s attention does not falter. I have not asked him, but I would be astounded if he did not find the reading tiring over a short period and exhausting over a long one.

And the material being addressed here is of a very high quality. In fact, I had not realised how good it was until I heard this reading: and I have read the whole volume at least four times, and parts of it much more. There were valuable sections which Anthony read which I had not remembered. I think the reason is that because of his understanding, he was alert to the significance of lines which something in me had just passed over.

Part of the value of hearing someone else read is that you then receive a different interpretation of the material. As we read to ourselves, we read with our own voices in our heads. It is salutary to hear a different voice, and bracingly beneficial when that voice is presenting an idea which was there, but which we had missed. For this reason, there is probably no such thing as a definitive reading.

For the last part of this review, I need to say something about the material. Possibly inspired by some of the available books, many people have got it into their heads that Ouspensky’s presentation of the Gurdjieff ideas is second-rate, or even seriously deficient.

I would not put Ouspensky on the same level as Gurdjieff, but then, neither did Ouspensky. He himself admitted, without any blemish of false modesty, that Gurdjieff understood far more than he did, and was of a higher being than his own. Mr Adie helped me tremendously to see Ouspensky’s humility which was by no means inconsistent with an awareness that almost everyone else he had met was asleep, and in their sleep, believed in words.

Gurdjieff himself said that In Search of the Miraculous was an authentic account of what he had taught in Russia. When Nathalie Etievan told him that she felt she could serve as a guide in the movements, but not with the ideas, he told her to read one page of Miraculous each day, and to write in one line what she thought the most important idea was. Jeanne de Salzmann accepted Miraculous as authentic. Even Jim Wyckoff told me that he considered it the only book worth studying in an ideas group. And Jean Vaysse was so greatly impressed by The Psychology of Man’s Possible Evolutionthat he tried to emulate it in Toward Awakening.

I would invite people to take the test. Download the book and listen. But make an effort to put aside any preconceptions and prejudices. Forget what you have read about Ouspensky, or what you believe yourself to “know” about him. Hear the voice which is being delivered through these lectures.

In particular, listen to Anthony Blake read it, because, I have to say this, I think the greatest strength of his excellent delivery is that he communicates the higher feeling Ouspensky had when he wrote this book. Not emotion. Higher feeling. Feeling united with thought so that fruit is Spiritual.