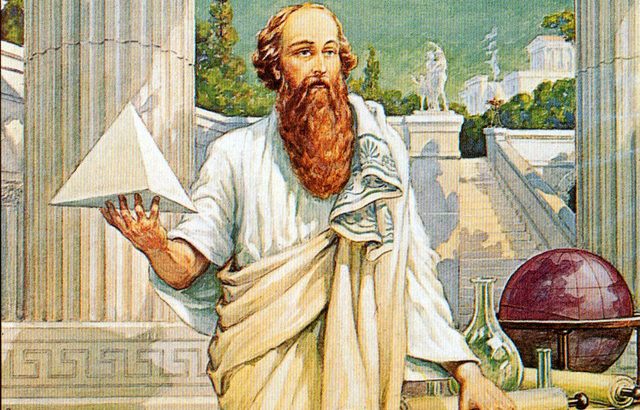 I deal here with the interpretation of the akousmata (lit. “things heard”) also known as the symbols (“counterparts”) of Pythagoras (possibly around 570-480): cryptic sayings attributed to him or his school.

Volume IV of Early Greek Philosophy, subtitled “Western Greek Thinkers, Part 1” (Loeb, 2016) states that: “A symbolonis originally a fragment of something permitting people who each possess a portion to recognize one another. This seems to be the original name for the statements that are also designated akousmata (a term that refers to the oral character of these statements: ‘oral maxims,’ ‘sayings’), in relation with the distinction between two categories of Pythagoreans, the ‘knowers’ and the ‘listeners’ …” (113)

The Cambridge Greek Lexicon (with which I wish to be buried) has this for súmbolon: “1. tally (each of two corresponding halves of a small object, such as a knucklebone, kept separately by the parties to a transaction, which might later be put together to guarantee the credentials of the holder).” Other glosses of the word show that it can often be translated as “counterpart, matching evidence, token (i.e. a proof of identity), admission ticket, reciprocal agreement, contract, signal, password.”

The Cambridge Greek Lexicon also states that akousma (pl. akousmata) means “1. that which is heard, sound,” and can also be glossed as “news. report, oral instruction, precept, recital performance.”

It is impossible for me not to think of Gurdjieff’s word legominism, which is plausibly derived from the Greek verb legō, “I speak,” and in particular from the passive patrticiple legomenos meaning “said.”

So the two terms akousmata and legominism seem to me to be complimentary aspects of the one reality: something is said – in these cases to pass on a special knowledge – and if we consider it from the perspective of the speaker, it is a legomenism, but from the of the hearer, an akousma (legominisms and akousmata in the plural).

It is striking, too, that the idea of the súmbolon includes within itself both sides to the communication: one speaks the akousma and the other understands it. It implies that the parties to the communication are in a relationship to the school: they have learnt something, and by certain signs which fit together to make a whole greater than the parts, show that they come from the school. I would expect that how they use the súmbolon and which one they use would also show something of their level. In this respect, what Gurdjieff told Ouspensky about drawing the Enneagram could possibly be a súmbolon.

One of the akousmata states that one should not eat beans. Yet, we are also told by Aristoxenos, an ancient source, that beans were one of Pythagoras’ favourite foods on account of “their purgative and relieving properties” (W.K.C. Guthrie, History of Greek Philosophy, vol. I, 189). If this is so, then either Pythagoras did not state one should not eat beans, or he did not mean it literally. As it happens, there is a tradition that the akousma is to be interpreted otherwise. Some of these interpretations are just guesswork, but one is of a different order. In On Divination, Cicero wrote:

Plato tells us to go to bed in such a condition of body that there be nothing to induce wandering or disturbance of mind. This is commonly thought to be the reason why the Pythagoreans are forbidden to eat beans, which have a flatulent tendency inimical to the pursuit of mental tranquillity. (Guthrie, 189)

Cicero may well be correct, although I suspect that the idea behind this akousma is that the bean is a symbol of a thought that cannot be peacefully assimilated by the mind. There is some support for this, and that is the Pythagorean discipline surrounding sleep and awakening which, once more, irresistibly reminds me of Gurdjieff’s advice around retiring, which I have collected as “putting the day to bed,” and his extensive advice about rising, culminating in the Morning Preparation.

I shall deal with rising and retiring together. In Pythagoras (Cornell, 2002), Christoph Riedweg quoted Quintilian:

On awakening, it was the Pythagoreans’ custom to arouse their souls with the sound of the lyre, so that they might be more alert for action, and before going to sleep they soothed their minds by means of this same music in order to calm them down, in case too turbulent thoughts might still inhabit them. (30)

Riedweg later notes: “Pythagorean daily life also included moments of self-reflection in the morning and in the evening,” and he quotes Porphyry:

Most of all, he recommended two moments for thoughtful reflection: when one goes to sleep and when one wakes up. For in each of these two moments it is fitting to think about what has already been done and what is yet to happen, each person accounting to himself for what has happened, but taking precautions for the future. Thus before sleeping everyone should sing himself these verses: “Also, do not receive sleep on your tender eyes, before you have thrice gone through each of the day’s deeds: where have I failed myself? What have I done? What duty have I not fulfilled?” But before getting up [sing] these [verses]: when you awaken from sleep, the honey to the heart, first watch very carefully what deeds you want to perform this day.” (33, citing Life of Pythagoras, 40).

I suggest that this may be the deeper meaning of the akousmata that one rising in the morning one should straighten one’s bedclothes, and remove all traces of one’s body. That is, when you awaken, get on with the day’s work, making careful preparation for the day, and not lingering in sleep or in dreams (whether of the night before or waking dreams).