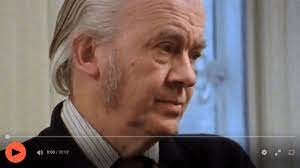 Ernst Friedrich Schumacher (1911-1977) was, at one time, an international figure for his visionary and ecologically aware approach to economics. His 1973 volume Small Is Beautiful was a global publishing phenomenon, and the posthumous follow-up A Guide for the Perplexed was also well-received. I knew that there was some sort of association between Schumacher and Gurdjieff, for Mr Adie had those two books in the group library, and Bennett said that Schumacher had a good practical understanding of Gurdjieff’s ideas.

There was something quite substantial in Schumacher’s interest in Gurdjieff. His daughter, Barbara Wood, makes some disclosures in her 1984 volume Alias Papa: A Life of Fritz Schumacher.

Schumacher met J.G. Bennett some time around 1952, through the British Coal Utilization Research Centre, in which Bennett was a leading figure. Wood gives us to understand that Schumacher joined in Bennett’s work weekends at Coombe Springs:

At weekends the BCURA laboratories … were transformed into a centre for a band of spiritual seekers who met to explore the meanings and implications of Gurdjieff’s teachings. Gurdjieff’s teachings immediately appealed to Fritz. They explained the paradox of the uselessness of knowledge, including spiritual knowledge. Gurdjieff taught that such knowledge was just ‘intellectual baggage’ if the seeker had not ‘woken up’, [and] ‘become conscious’.” This engagement with Gurdjieff’s ideas caused him to realise that he needed to be more available to his feeling; and that for him was quite difficult, as he had been, he said, developing his intellect so that now “it tries to push itself into the forefront at every opportunity.” (232)

After six months, he felt that he was seeing real results, in that a “deep inner stillness and calmness” was entering his body, feelings, and thoughts, such that: “Through this one gains an extraordinary strength and happiness.” (232)

This caused the differences between his wife Muschi and himself to become greater. Woods mentions Schumacher speaking about “intellectual baggage” and flying saucers, which probably refers to Beelzebub’s Tales. Through Schumacher, others attended Bennett’s lectures. including his wife.

In the summer of 1953, Schumacher became interested in the writing of Maurice Nicoll, who died on 30 August 1953. Wood does not explicitly state that Schumacher met Nicoll, but she does imply this when she writes: “Nicoll impressed [Schumacher] even more than Bennett and after reading one of his books, The New Man, suggested to his mother that they should translate it together.” (253)

Still in 1953, Schumacher met and was greatly taken by Edward Conze, who introduced him not only to Buddhism but also to astrology. It seems to me that Schumacher’s acquaintance with any Gurdjieff groups, and therefore with the practice, was rather slight. Over the next four years, he attended Conze’s lectures, and studied, Aquinas, Guénon, Maritain and read the lives of the saints (I guess that Wood means the Christian saints). Yet, when in 1958, Schumacher delivered a guest lecture in one of Conze’s series, it was “on Gurdjieff and the ‘work’, and his fellow pupils were so impressed that they asked [Schumacher] to lead them in a group meeting after the lectures had finished.” (256) They met each week for about a year. Some of them went on to study Subud, and although Schumacher experimented with it, he soon gave it up.

From May 1957, Schumacher had begun teaching spiritual ideas in public, and developed a theory of stages f primitive religiosity to scientific realism, and hence to “a higher plane of consciousness.” (257) I will close quoting Wood’s words on her father’s conclusions:

[Schumacher] called for an inner development, or raising of consciousness, so that the urgent requirements to ensure the world’s survival could be worked out and put into practice. The weakness of the Christian church, he suggested, was an apparent lack of precise instruction on how to ‘have the  faith’. For instruction on how to do this, he directed his audience towards the oriental creeds whose strength he saw in their precise instruction for those on a serious spiritual search, which he had not discovered in the Christian church. They boiled down to something very simple but very difficult, namely: take yourself in hand, control your mind by recognizing the aimless drifting of your life and thoughts, control your body through posture, relaxation and breath control for ‘a slack body is a slack mind’. And control your morality for morality means order and immorality disorder. The techniques for achieving control in these three areas of mind, body and actions were to be found in all religions. [Schumacher] named a few – yoga and meditation from the East, the traditions of Greek and Russian Orthodox mcm, St Ignatius Loyola’s three types of prayer, Gurdjieff’s ‘work’, and the techniques of F.M. Alexander in the West. Any of these would lead to self-control and self-awareness and beyond.” (266-267)

I think that there is a lot more which could be learned about Schumacher’s relationships with Bennett and Nicoll. Whether it will ever be learnt is another matter.