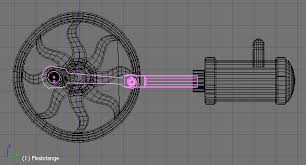 In this meeting from Wednesday 2 April 1986, Mr Adie made reference to the image of the flywheel, one which he had used from time to time. Fortunately, I am old enough to remember how flywheels would be attached to sewing machines. Further in these exchanges, what he said about the relation between dreams and waking consciousness is of great value. It is funny how he suddenly added this important comment at the end of an answer, by way of development.

In the first of these two questions, a woman has just mentioned how she has noticed that she is always looking to the outside. Adie stopped her mid-sentence.

“Let me interrupt. When you do that, can’t you try and remember that that is not the outside, but that it is the outside you are projecting? It’s nearly all lies. If only I could recognise more quickly that this fixed belief of persecution comes from me. It’s not there. There’s nothing like it, nothing. My hurt, my injury, my suffering is all a nonsense. Life is not like that which I project.”

She agreed, adding that it was very old, and that even in her childhood she had had this sense of being excluded and hard done by.

“Well, if I see that,” said Adie, “and I understand it, it means that there’s a path for inertia, a path for associations. It’s been going to go on for a long time, and the only alternative I have is to use it. Every time I notice it, I immediately come to myself. I use it. I refuse this unnecessary suffering. But this weird construction is a monstrous construction of self-persecution, which invades me and makes me damage myself. This is a tremendously difficult thing to undo. It has a big flywheel, with the momentum of all the numbers of times it’s happened, and once it’s in motion, it doesn’t want to stop. But I can seize a second or two. All this is still going, and once I am present, it stops.”

“But while it’s going on, I can reckon on that fact that it’s not going to stop, so there is no hurry; and also because it isn’t going to stop by itself so long as I am not present. I mustn’t give up. That is all I have, in the sense that it is my material. I can be grateful for anything which I can use for self-awakening.”

“If it is enough to awaken me, I can even acknowledge that I have fallen down, without bitterness. I say: “Ah! This is the old thing again. But now I take a second for myself.” I affirm this fact, that external life is not like that and never was like that, it is part of my inner construction, upon which I am working, about which I occasionally have a real definite wish.”

“I interrupt the speed of this enormous inertia. It’s like a flywheel. You know a flywheel on a card, it balances the energy. There’s a balance in all that material, and so it was possible not to hurry. I see now a possibility of using the work.”

“We have a tempo which is associated with strife and worry … Hurry is one of the great ways into the machine, to get tangled up in all the automatism of it. Everything is terrifying and jerky. Fearful. It’s all the functioning of the accidental, unintentional, automatic machine. So if I can cease from hurry, in fact, if I can manifest at all innerly, it has an effect. If I deny something in order for development, then it’s an affirmation: it’s negative, but it’s in positive form. We have to learn not to do, because all that which we thought of as doing was not doing.”

“So the first thing was to learn not to do, not to get embroiled in this concept of doing, doing, doing. I may get a purchase on it, I may free myself a bit, but it’s the very construction of my thought, my life, this doing. Then  there suddenly comes an inner challenge. Maybe I forget, but a master doesn’t.”

“A master, and this is a sign of a master, that whatever the situation, I am in possession. They can see at any moment. And the nature of the gesture, the posture of such a thing is unforgettable.”

“Also, I have to acquire a strong disbelief in my normal psyche. This perspective makes dreams very interesting. One goes to sleep, and is subject to all sorts of dreams. They’re very interesting, because they will tell you how far you’ve got. If you wake up with all sorts of fantastic dreams going on, and then it has an effect on you. It shows you the material that’s there, prepared still be to be associated.”

“This is theory of course but you can imagine a master, if he’d really done his work, all that is resolved and harmonised, so he doesn’t get those dreams any more. But until we reach that stage which is very high, one is subject to dreams. In dreams, one believes in anything: that is the essence of a dream. In dreams we are completely unidentified, just by association, a crazy thought will come, and we believe it.”

“And then sometimes it’s so horrifying, or stupid or idiotic, that it even awakens us. Then we awaken, as is said, under the influence of an oppressive dream. And that can go on in the daytime. But the question is, do we enter the life of the work? Could my life be called a life of the Work? At times it can: but how much, and how much more?”

A young man now said: “This afternoon I was at a loss. I had something to do but kept being interrupted. I became identified with it. I was very fixed, I did not know which way to move, as I wanted to finish the job but someone was speaking to me about something important. But I was tense. It was as if I knew what to do, to relax, and to remember about my breath, but I couldn’t do it.”

“It takes some doing to smile on the threatening weapon,” replied Adie. “You more or less have to answer this fellow that’s speaking to you, but you have another job to do. You can’t just give either of them up. But there is still room for being. To get to that point, having that degree of choice, is not nothing. So I am now in a position where I cannot escape the quandary, but neither do I have to be demented. I am there between two demands. So, I am pulled, but I am still there.”

“If I am there, I can be aware that I am being pulled in two different directions, at the one time, and that I have to appoint my attention in time. I may have to find the right way to say: “I can’t do this right now”, or “I can’t speak to you right now, but I shall later”, without , if possible, sounding arrogant or dismissive. But then I have to come back to him later on, and say: “Sorry, what was that you wanted to say?”

“In that situation, the benefit is that you feel the momentum, the flywheel. You can’t deny it, or the momentum. Do you know what a flywheel is? It’s a special wheel, rather weighty, and designed to be heavy enough to give sufficient momentum to keep all the moving parts rhythmic. All the many movements of the machine would be jerky, only that the flywheel is always turning, and harmonises the movements of all the parts.”

“We have something like this mechanical harmonising factor within us, with its great momentum. It regulates the different parts of our personality. You can’t suddenly stop that, although it is subject to the law of accident, and every now and then a real shock comes along. But I can be aware of it. Then, in that case, the wheel will continue to turn, but it won’t have the same effect because it’s now connected with reality.”

“I separate myself from fantasy: the fantasy becomes less and less troublesome as I become present to the real world. I still have the fly-wheel, because it is part of the mechanism of our mind, the lower part of our mind, and our slavish feelings which follow our thought. Even in our ordinary mechanical thought and emotions, there can be disagreements: some parts of the dreaming apparatus are more reasonable than others. But if I am too deeply asleep, then even that reasonable voice merely adds to the clatter. It has no effect.”

“So I have to be available to hear this fine sound from above which permeates even that awful din. A reason of a higher level. A faint radio signal from comes miles off, and when it’s among the air waves nothing can be heard. It’s lost in the din. But if I can pick it up on my receiver, then I have a chance. My receiver is my finer thought, my finer feeling, then it can be heard.”

“What will save me? I cannot expect the laws of life and the inertias to stop. But when I awaken in the morning, there’s a chance. The higher impressions are always new, always unique. Never the same. So I have to make myself available to finer material. No two sunrises and no two awakenings are ever alike. So what is new? What have I seen today, what do I see now, which is new?”