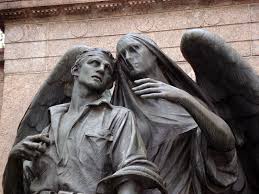 Formulations play an enormous part in our lives. They are necessary: whenever we speak we use formulations: “Good morning”, “I am …”, “Would you like …”, “Can you tell me the way to …” If we had to stop and piece each phrase together word by word life would be much more difficult for us, and no advantage would accrue from that difficulty.

There is no harm in formulations, provided only that we are present to them often enough not to let them control us. We do not have to be present all the time: we only need to sense with our feeling when some more presence is needed so that I can supervise the operation of my mind, and so be able to choose among, or to alter, or even depart from my fixed formulations.

This can lead to the almost exhilarating feeling of being present to my own thought. It makes surfing and skiing seem flat and slow in comparison.

But sometimes these formulations not only control us, they define and limit us. Charles Dickens would ruthlessly define some of his characters by their fixed formulations, e.g. in Bleak House, Snagsby says ad nauseam: “Not to put too fine a point on it …”

We all know people like that. We are among their number. The difference is that, with other people, we can clearly see that when they come out with their favourite phrases, they are on automatic pilot. We can rarely see that with ourselves. I knew one person who frequently said: “In essence …” as if by using that phrase they were necessarily getting right to the heart of the matter. But you could tell that the phrase was used for self-reassurance as much as anything else. I knew one politician who would say: “Be it (whatever) or be it (something else) …” as if that made them some sort of intellectual. All it did was telegraph to people how limited their thought-horizon was.

The problem is that when we use these formulations we go into definite psychological and emotional states. Further, something in us enjoys those states because they are familiar. I may be floundering for the right thing to say. A fixed phrase comes up and it is as if I have safely arrived home. Something in me hears myself “be it this or be it that …” and it is satisfied. For example: the first person may have been trying to bring their argument to a conclusion and could not do so. Then they thought of saying: “in essence”, or perhaps they heard someone else say, and it seemed impressive. They have learned a new trick.

But the fixed formulations can be on larger patterns than just a word or a phrase. An entire way of proceeding, arguing or speaking (and speaking is far more frequently arguing than we realise), can be a fixed formulation, or perhaps better, according to a fixed form. Perhaps someone keeps using a particular debating trick to stump others: one person I knew would just lie outright and insist that the lie is the truth. It left people all at sea. Could this person lie so baldly? Have I perhaps been completely mistaken? But then, after a while one might realise that the person really is either lying or is an utter fantasist. I learnt then to reply: “Just because you insist on it, it doesn’t mean it is right. My memory is just as clear as you say yours is, and I trust mine more.” There is then the possibility that, having learned this, something in me will continue to trot it out, even when it is not quite appropriate, or at least to think it. So perhaps I then imagine that everyone whose memory is different from mine is really fantasising. It might not be so. I need discrimination, and that can only come with presence of mind and feeling together.

This slavery to formulations often arises with insults but, also, sometimes with compliments. Someone says something for good or for bad which is too strong for the circumstances. People can sense that. Often the speaker senses it as soon as they have said it. But what has happened? Habit has taken over, the fixed formulation which has served so well in the past comes out, and I find, after the event, that it has failed me on this occasion.

Specifically, the sensitivity of feeling I need to judge what should be said and how it should be said on each occasion, was not available to me because I was running on automatic pilot.

I had a relative, an elderly man with whom I became closer the older he grew, who had a habit of always saying “no” to any request. Once, after many years, I heard him say: “I realise now that my first response to you always seems to be no. Let’s start with that. I have said no, and that maintains the status quo. But now you have a chance to persuade me.” We all had a good natured laugh. It was fair and it was beautiful.

The part of the mind which uses these formulations is called by Gurdjieff the “formatory apparatus”, although a different part of the mind may be employed to actually fashion them is the first instance. But to make a fair judgement when I am faced with subtle circumstances, I need some feeling of myself as present before the situation. The dominance of feeling and formatory apparatus stand in inverse proportion: the more formatory apparatus, the less feeling, and vice versa. But they can be balanced. How do I balance them? With the same sort of flair I use when balancing on an ankle board. Something very honest in myself can sense the nature of the balance – better, worse, better … at least sufficient for the occasion.