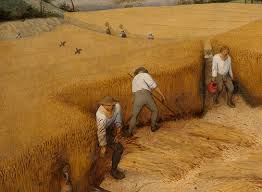 Part One: Where We Stop

How is it possible that we can work at Gurdjieff’s methods and study his ideas for decades, and yet make little advance beyond a certain point? Why, after so many years “in the Work” as we reassuringly say, are so many of us so ordinary for so much of the time? Who has developed even to man number 4?

As I wrote in “Where Are the Gurdjieff Groups Heading?”, when people come to groups, they often make tremendous advances, but then, they often progress only by small steps, or tread water, or even go backwards. If this were true only of some people, or even many, we might explain it by reference to individual faults. But it seems to be the case with everyone. With many of us, it seems that particular negative emotions and attitudes even become ironed in by “the Work”. It is this which I am referring to when I ask about where we stop.

It seems true, as Mr Adie said to us: “I think I’m awake, but I’m not. I’m still asleep.” According to an unpublished transcript, Ouspensky was asked some questions about whether people such as explorers who go to entirely new lands, in difficult circumstances might not be awoken by their experiences? Ouspensky replied that, as a rule, it was all done in sleep, only they have “different dreams”.

How can this be? How can we think that we’re awake, and yet be asleep? Could I be one of those people who thinks he is awake when really all he is experiencing is “different dreams”?

Does not the self-awareness necessary to say: “I am awake” mean that it must be so? After all, surely I would know! But a little reflection will show that this cannot necessarily be right. I recall once at a group meeting, one man who had been in groups for thirty years or more, behaving quite boorishly, and adding: “I am aware of how I am manifesting.” Later, I discussed it with another of the “older” people. She accepted what he his actions as fair and reasonable. After all, she argued, he had been aware of his own circumstances. But I felt then, and I am certain now, that she was quite wrong in this. Although he had said that he was aware, his awareness was patently very limited, and no a priori argument can prove otherwise. However, I did not know how to explain it to her. I was too slow.

I think that I can explain it now. As Dr Lester said to me once, a lot of our self-criticism is one centre observing and critiquing another. That is evidence of some awareness, but it is, as Gurdjieff said “semi-hallucination”.

My thesis is that we all have, for too long, mistaken semi-hallucination in the state of relative-consciousness for being awake in the state of self-remembering. In Part Two, I explain what I mean by this, and in Part Three, I try and constructively approach the problem.

Part Two: The Heights of Relative-Consciousness

Part of the problem, perhaps even the most trenchant part, is that we do not understand waking-sleep or relative-consciousness. A great deal is possible for us in that second state: we can use our senses, perceive, compare, learn, analyse, build, raise families, even produce artistic and other works of great variety and size. We can have moments of rich feeling, do tremendous work on our bodies, and erect intellectual skyscrapers. Most significantly perhaps, even in this state of relative-consciousness, we can be aware of two centres: one centre can observe another, giving us a sort of stereo-vision which quite surpasses the narrow telescoping we are usually limited to.

I wonder, could it be that we stop making efforts too soon because we compare hallucination to semi-hallucination, see a huge difference, and believe that we are therefore awake?

Not everyone who “waking” makes it to semi-hallucination, and if they do, it is often not for long. So it is not as if it is no achievement, and yet, it is still sleep. It is because we have not sufficiently studied (and especially, have not studied in ourselves) the state of relative-consciousness or waking sleep, that we are liable to mistake its upper reaches as being the third state, self-consciousness.

Self-consciousness is, for us, remote. Many experiences of self-observation are necessary, and these must gradually become longer and deeper. before they are sufficient for us to be able to call them a state of self-remembering, the third state of consciousness.

To really have self-consciousness, I must be conscious of three impulses at once: I AM, I WISH and I CAN. This is the very point, I contend, of the Third Series, Life Is Real, Only Then, When “I AM’. I shall not go through that book extracting the evidence, because I firmly believe that this is an individual task, and were I to do so, it would rob the reader. It is enough that I have pointed in that direction. Undertake the study: you may agree, you may not.

In a state of self-consciousness, I am not only aware of my physical sensation or the sensation of part of my body, I am also receiving external impressions of sound, sight, touch, taste, temperature, ambience and so on. The internal sensations can be deepened to include my breathing and the pulse of my blood, and the workings of my nerves, at least in various parts of my body.

In a state of self-consciousness, I am also present to my feeling. I feel my existence, very possibly also a certain love of my reality (although here the words “love” and “reality” must be taken as approximate). I feel my relationship with external reality, too, and my desire for understanding. I feel a desire to attain to my aim or aims.

Finally, for there to be a state of self-consciousness, I must also be present to my intellectual processes. It is as if I stand behind my organism and see all this functioning: there is separation but there is also relation. What there is not, however, is identification. At least, there is only enough identification for me to be able to observe. To be precise, there is light identification without immersion.

But if we do not believe that such a state is possible, or that if it is possible, that it is greatly to be desired, then we can never attain to it. The flashes we receive are not enough. The state must last for me to appreciate and to know by taste the difference between that and the higher levels of the second state: waking sleep. In a word, there must three impulses, consciously cognised, simultaneously. Without that, there is, at best, semi-hallucination. That state is only relatively conscious, but at least it is relatively conscious. That is why we stop there.