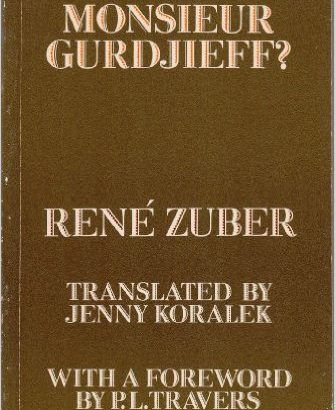 It might be appropriate, on the 13th, to review a somewhat under-appreciated volume by a personal pupil.

Zuber was one of the French group, who worked with Gurdjieff during the war. As befits a man who had the advantage of personal acquaintance with Gurdjieff, there are some extremely good passages in this slim volume.

The author presents as humble (see for example his comments on pp. 65 and 69). He is undoubtedly as sincere as he can be. We cannot know what he may have held back, but he has told some stories against himself (the most powerful of which is at p. 15, concerning money, but see also p. 20 – he told Gurdjieff that he “created” films, and Gurdjieff rebuked him in these words ‘You not create. You shit!’)

The book does not seem to follow any plan: it wanders, returns and meanders. It is short enough for this not to be a serious problem, but it does mean that the book presents more as a collection of anecdotes than as a whole with direction.

If this aspect has a saving grace, it is that it meanders through some striking scenery, such as when Zuber states: “We Westerners need dictionaries and encyclopedias to satisfy our insatiable need to know by always bringing back the unknown to the known.” (p. 19, his italics) Then, when Zuber asked if cooking was a branch of medicine, Gurdjieff replied that medicine was a branch of cooking (p. 26).

But there is a certain method to this, if not madness, then lack of intellectual direction. Gurdjieff, Zuber tells, us: “…invites us … into a personal relationship with him … But is not a personal relationship by its very nature incommunicable.?” (p. 60) I am not sure if this is true today, after all, surely it is the ideas and methods which are important. Leaving that aside, this, I think, is behind Zuber’s apparently undisciplined style: he is trying to point us in the direction of something which is incommunicable. Perhaps his situation is analogous to that of a young child who cannot tell others what he wants them to see, so has to lead them to where it can be pointed out.

To that purpose, pointing rather than painting, Zuber avoids presenting anything linear. On one page, he tells a powerful story about love of parents (p. 30). On another, describing dinners with Gurdjieff, he says that  he experienced “a recaptured childhood: I was finding once more the taste of my own childhood, which had been interrupted by life. I was becoming a child again instead of the elderly young man I had become – a child who was not interested in the past, but was filled with wonder and astonishment at the present, which assailed him from all sides.” (p. 30)

Incidentally, here is one feature of Zuber’s style which I do not think works well, he has a tendency to add unnecessary clauses. In my view, the above paragraph would have been stronger without the final words “which assailed him from all sides”. (Speaking of poor writing, the foreword by P.L. Travers is a self-important travesty: “Who are you, Arthur, Taliesin, Prester John …?”)

Zuber presents an unforgettable picture of Gurdjieff reproving mothers who made children mechanically say “thank you” (p. 62). Then, he notes that Gurdjieff was against any form of “auto-satisfaction”, including that which came from falling in behind a guru (p. 64).

Quite importantly, not only for me but for his book, Zuber presents some deep insights concerning Gurdjieff’s relationship with Christianity. He notes that Gurdjieff said that his system could be called “esoteric Christianity”, and insisted that only one who could put Christianity into practice deserved the name of a Christian (p. 36). He goes on to quote some of Gurdjieff’s aphorisms, including these three which, he notes, Gurdjieff impressed on them in the last years of his life:

“Today exists to repair yesterday and to prepare for tomorrow.”

“Those who have not sown anything during their responsible life will have nothing to reap in the future.”

Zuber continues: “How often he voiced the idea that there are only two ways of freeing the man (not yet born) from the animal (who carried the man in embryo): conscious labour and suffering voluntarily undertaken. This was the Alpha and Omega of his teaching, his final message … One would have to be deaf and blind not to recognize that this thought and the Christian tradition are identical in essence.” (pp. 38-39)

His conclusion is quite arresting: “The essentially Christian flavour of his teaching … generally passes unnoticed. That Gurdjieff wished it to be so is beyond doubt. If he had revealed to us that he was teaching in the direct line of the Gospels – which is what emerges for us from the reading of his books – he would have caused the worst kinds of misunderstandings. We were not ripe for such a confidence.” (p. 44)

Can we say that the book is about anything? Well, it is about Gurdjieff. But more specifically, it is an invitation to engage with the man and his teaching. That is the deep intention of the book. That is why Zuber includes this deep and also touching discussion of tradition.

Tradition, he says, is “the transmission of a living primordial knowledge and not … a blind attachment to the forms and structures of the past.” The lighting of candles in the Orthodox Church exhibits “a perfect symbolical representation” of tradition. Zuber finds that in the practice whereby each person lights his candle from his neighbour’s. “This little flame – which the slightest breath could blow out – is, in fact, fire – fire coming from another fire which, passing from one person to the next, will light as many flames as there are souls present. The image is perfect because fire, reborn from fire, cannot be corrupted.” (p. 53)

If only it were always so for teachings and those with the responsibility to pass them on. This book represents a unique effort. It does reward returning to it after some time. To close, Zuber seems to point to what I saying when I questioned his idea of an invitation to a personal relationship with Gurdjieff. You will recall that I said surely the ideas and methods are what is important. Perhaps Zuber really thought so too, for the final words of the book are: “A master meets you for the sole purpose of showing you the direction, the way to the inner master which is called conscience. He helps you to discover that you are already its subject, but that you were not aware of it. And then he disappears. He melts into the sky as the mountain does the moment you believe you have set foot on it.” (p. 65)