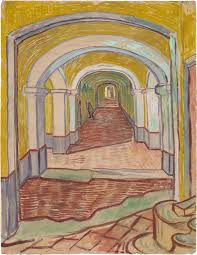 This comes from the weekend of Saturday 5 April 1986. Someone asked a question at lunch. This person had previously been doing some sort of meditative practice. I am fairly sure it was in either the Hindu or Buddhist line. He said that he had been trying to keep awake during the reading from All and Everything, but had been too tired. As he said of himself: “I couldn’t win”.

“Then something different happens to me and I wake up. It comes. Or I may get taken, but I make an effort, and that leaves a trace. Mmm?”

“I think it’s important you raise this. You have the tendency, owing to a lot of practice of shutting your eyes and doing certain exercises, a sort of retirement, and it’s been a retirement into sleep sometimes, in fact, very often. And that’s quite a habit. So, somehow you have to retire into awakeness. Find somewhere where there is a quickness in you. To be very quiet there. On no account close the eyes, and don’t look down. But open like that to the reality.”

“When you were practising the movements tonight you were looking down to your feet. You may have to at the start, if necessary, but when you’re in the movement, do it by sensation and have your glance ahead, in the movement. You’ll find there’s different ways of countering the tiredness at different times, and you’ll start to have a full armoury at your disposal.”

“The way to stop sleeping is to add shocks, so if you can find how to add shock for yourself … Not enough to take your attention away from what you want to hear or do, but nonetheless, something a bit unexpected. There’s plenty of energy available, sometimes a good yawn will connect you with one of the smaller accumulators. One of the accumulators may have run-down, and yawning, or some new impression, a shock, that makes a connection, and you find you’re alright.”

“Nothing is guaranteed. You try a few different things, and experiment. If you had some real air coming into your nostrils, then it’s obvious. Particularly important is the posture of the head. If the head is like this … but I want it balanced.”

“I would see people going into Mr Gurdjieff’s reading with a needle in their hand like that, because there would be many people in this small room, and one could become very tired, but then it was also very powerful to try and resist, the atmosphere was such that you wanted to hear. I am not saying that it’s the right thing to do in all cases; I am only saying that people went to that trouble to provide themselves with a sharp needle.”

“But I am glad you ask that. It’s right you ask it. You have something there. If you remain with it for two or three months, you will make big inroads. You will be able to differentiate between the different sorts of fatigue. Some fatigue is just purely physical. See what you find.”