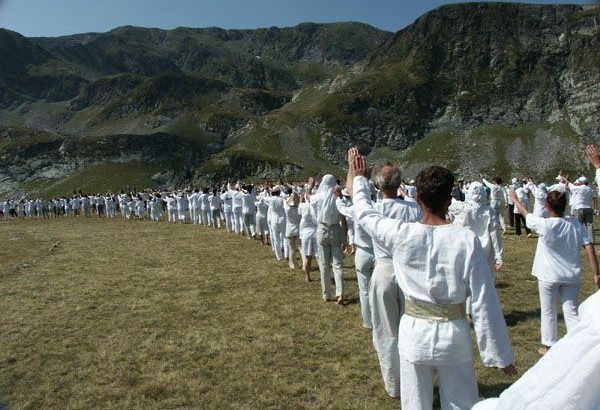 The next article to comment on is by Sydney’s own Dr Johanna Petsche. Johanna begins by placing the contemporary recordings of Gurdjieff’s music, and noting how the Gurdjieff groups are ambivalent about them. Personally, I do not doubt that, all things being equal, a live playing is best. For one thing, the vibrations of the instruments enter the body with a directness a recording never possesses. But all things are not always equal, and recordings are not always . A recording of Thomas de Hartmann may be more valuable, even within groups, than a poor rendition. Johanna then sets out her understanding of Gurdjieff’s system, as a necessary background to her essay: after all, to understand Gurdjieff’s music one must have some understanding of the entirety of his achievement.

Johanna then turns to the writing of the music, and how it was used in conjunction with the reading of Gurdjieff’s book Beelzebub’s Tales (and possibly also, Meetings). She notes that there are indications that the music was intended to realise emotionally what Gurdjieff’s ideas realised intellectually¸ and so feeling and mind would be catered for in a complementary manner. There was also an idea that the music could help one better understand the book, which means that emotional experience can aid in intellectual understanding.

Interestingly, Petsche notes that Gurdjieff abjured and deplored contemporary music. Gurdjieff’s music was a traditional music. I think that this is significant. But that does not mean that it was imitative.

After describing Gurdjieff’s music, Petsche attempts to situate the music within Gurdjieff’s teaching methods. Probably the most important aspect here is her thesis that: “musical devices typical of Gurdjieff’s hymns work to destabilize the listener, bringing attention and effort to the process of listening” (80). Especially in the hymns, where one could expect regularity and an unvarying rhythm, Gurdjieff introduces discontinuity and changes the timing. Things often do not seem to be in the right place in Gurdjieff’s music, and he often produces a feeling of restlessness.

Johanna draws an analogy between Gurdjieff’s unorthodox styles in music, in prose and in the Movements. In all of these, expectations and inclinations are subverted. She then relates this to Gurdjieff’s overall aim, and his strategies for encouraging his pupils to awaken their attention and to make efforts.

Petsche then deals with the publication of the sheet music, and the production of the recordings. When she deals with Gurdjieff’s influence on musicians, she reveals what I, for one, had never known, that a “Swedish symphonic metal band” had written a song called “The Voyage of Gurdjieff”. So that brought me out of my shell. This is gist of the article, but it continues to draw out the consequences.

The next article, “The Contemporary Context of Gurdjieff’s Movements” by Carole Cusack is a unique survey of the movements in a world which also saw Steiner’s Eurythmy, and other less well-known forms of dance which were associated with or on the fringes of Western Esotericism.

Cusack commences by observing how music and dance have been always joined to man’s religious and spiritual cultures. That, I knew. I had not known that aesthetic experience and evolution had been connected (97), however, it makes sense. Noting that Protestant Christianity removed much of the art and ritual of Christianity, Carole observes that the Reformation brought about a “relativisation of Christianity”. She then traces other currents, including the 19th century English emphasis on sport, an comes forward to the 20th century and Gurdjieff, Steiner, Deunov (originator of “Paneurhythmy”), Rudolf von Laban (and his Laban Movement Analysis), and Diaghilev’s production of The Rite of Spring.

There then follows a good introduction to the Movements, including the little-known fact there are differences between the Sacred Dances (what I call the first series of movements, produced in the 1920s) as practised by the Ouspensky lineage and by the Gurdjieff Foundations. Cusack relates this to Gurdjieff’s teaching, and the need, according to it, for three-centred attention.

An interesting section on Dalcroze follows, and it is noted that several of Gurdjieff’s movements instructors had studied Dalcroze’s method. It is worth noting once more, that de Hartmann said, describing a movements demonstration from 1923: “… there was one person who was very displeased with the demonstration. This was Emile Jaques-Dalcroze. Perhaps it was because everything that he saw contradicted his own system of movement …Here everything was based on quite another principle of anti-mechanical movement, simultaneously developing physical work with consciousness and even prayer, as in the Dervish Movements” (Our Life with Mr Gurdjieff, definitive edition, 206).

Cusack then examines Steiner’s Eurythmy, von Laban’s kinetographie and “Movement Choir”, Deunov’s Paneurhythmy, and the Rite of Spring. I had experienced Eurythmy when I was at university, but had never seen the others until I looked them up on the net after reading this article. There are similarities to Gurdjieff, both in movement and in philosophy. But I think that the differences are greater.

Cusack’s conclusion is that the extent of Gurdjieff’s connections with the cultural world are often understated (117). This is surely correct. She also makes the intelligent point that she is not alleging a causal influence, e.g. that Gurdjieff took his Movements from Paneurhythmy, but rather the: “the esoteric scene of the early twentieth century was dominated by movement art forms that existed in parallel with the secular world’s emerging love affair with the body, physical fitness, and individual and collective human optimization” (118).