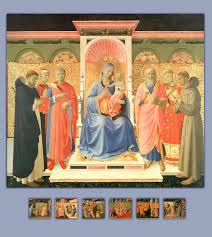 On 1 August, our Maronite Church celebrates the feast of St Shmuni and her seven sons. Their story is told in the Second Book of Maccabees, which I extract in Part Two below. To be brief, this woman and her seven sons were Old Testament figures, who were put to death by the tyrant Antiochus Epiphanes (167/66 B.C.) They are, therefore, like the Massabki Brothers, models of final perseverance (and the faith and courage which are inseparable from that).

But before setting out their story, I would like to make one important point about these martyrs which can properly be made about them, but not about most of the martyrs whom we remember: the fact that they lived before Our Lord. Further, they were killed because they showed their devotion to the Law of Moses by refusing to eat pork – and the vast majority of Christians considered that there was no prohibition upon their (that is, the Christians’) eating pork now that Jesus had fulfilled the Law of Moses. So how could Christians venerate people who were not Christians and had died for a principle which we do not even hold?

St Gregory of Nazianzos (died 389), one of the Greek-language writers who is important to the Maronite tradition, mentions them in an oration titled On the Maccabees. There, he “defends the Maccabean martyrs against some members of his congregation who opposed the veneration of the martyrs arguing that they were not Christians. They are worthy of homage, says Gregory, for those who gained perfection before Christ were able to do so through faith in Christ (56,14-16); the Word was known to those of pure mind even before He came to the world (56,16-57,2).” (I cite Witakowski’s study in Symposium Syriacum VI, 1994).

Gregory states that Shmuni, her sons, and all who were honourable, could only be what they were because of the Logos, the Word, which is Christ Himself, who has existed from the beginning. Further, he goes so far as to say that by giving their lives for their faith (which was in continuity with Christianity) they “lived in accordance with the Cross.”

It seems to me that this is entirely consistent with the Maronite position, set out in my book An Introduction to the Maronite Faith, that non-Christians will be judged by whether they lived in accordance with the consciences which God has given each of us. After all, what is a “pure mind” which is informed by Christ than the voice of their conscience?

That tradition was first, so far as I am aware, spelt out by St Ignatius of Antioch, who wrote: “ For the divine prophets lived according to Christ Jesus. On this account were they also persecuted, who by his grace were inspired, to the end that the disobedient might be fully persuaded that there is one God who manifested himself through Jesus Christ, his Son, who is his eternal Word …” (Magnesians 8.2).

St John Chrysostom also defended their cult against those who could not accept non-Christian saints. He did so on the basis that Christ was the Eternal Legislator, and that the Law for which they died was a Law which Christ had given.

I think it is important that this be understood: some people mistakenly think that we teach that everyone who is not a baptised Christian is going to hell. This is not correct.

It came to pass also, that seven brethren with their mother were taken, and compelled by the king against the law to taste swine’s flesh, and were tormented with scourges and whips. But one of them that spoke first said thus, What would you ask or learn of us? we are ready to die, rather than to transgress the laws of our fathers.

Then the king, being in a rage, commanded pans and caldrons to be made hot:  which  forthwith being heated, he commanded to cut out the tongue of him that spoke first, and to cut off the utmost parts of his body, the rest of his brethren and his mother looking on.

Now when he was thus maimed in all his members, he commanded him being yet alive to be brought to the fire, and to be fried in the pan: and as the vapour of the pan was for a good space dispersed, they exhorted one another with the mother to die manfully, saying thus, “The Lord God looks upon us, and in truth has comfort in us”

… So when the first was dead after this manner, they brought the second to make him a mocking stock: and when they had pulled off the skin of his head with the hair, they asked him, Will you eat …? But he answered in his own language, and said, “No.” Wherefore he also received the next torment in order, as the former did.

(The third is put to death, and the fourth son said to his persecutors:) “It is good, being put to death by men, to look for hope from God to be raised up again by him: as for you, you shalt have no resurrection to life.”

(The first six of her sons are all killed. Only the youngest is now alive.)

“But the mother was marvellous above all, and worthy of honourable memory: for when she saw her seven sons slain within the space of one day, she bore it with a good courage, because of the hope that she had in the Lord. Yes, she exhorted every one of them in her own language, filled with courageous spirits; and … she said unto them:

“I cannot tell how you came into my womb: for I neither gave you breath nor life, neither was it I that formed the members of every one of you; but doubtless the Creator of the world, who formed the generation of man, and found out the beginning of all things, will also of his own mercy give you breath and life again, as you now regard not your own selves for his laws’ sake.”

(Then, to the seventh son, she says:) “I beseech you, my son, look upon the heaven and the earth, and all that is therein, and consider that God made them of things that were not; and so was mankind made likewise. Fear not this tormentor, but, being worthy of your brothers, accept your death that I may receive you again in mercy with your brothers.”

While she was yet speaking these words, the young man said, “Whom do you wait for? I will not obey the king’s commandment: but I will obey the commandment of the law that was given unto our fathers by Moses. …  For our brethren, who now have suffered a short pain, are dead under God’s covenant of everlasting life.”

The narrative ends by saying: “Last of all after the sons the mother died.”

May their prayers be with us.