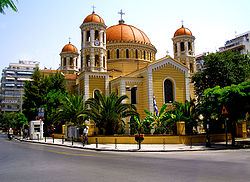 In an earlier posting, I mentioned that, in 1954, Kadloubovsky and Palmer had published a second volume of extracts from the Philokalia. Its full title is Early Fathers from the Philokalia, together with some writings of St Abba Dorotheus, St Isaac of Syria and St Gregory of Palamas selected and translated from the Russian text Dobrotolubiye.

Appendix II, found only in the 1954 edition, is a most significant document. In a manifestation of the Maronite Chaos Factor (far more powerful than any of the so-called “four fundamental forces”), this piece is titled “The Practice of Unceasing Prayer, by one of the compilers of the Greek Philokalia” in the table of contents, but by a completely different name in the text (“From the Life of St Gregory Palamas, Archbishop, miracle-worker of Thessalonica”), so that when arrive at p.412, you wonder if you have the right text. This conclusively proves that St Gregory was from Mount Lebanon.

The text is said to be but a small portion of a much longer one which had been drawn from Philotheus’ life of St Gregory, but to which has been added to some material from one of the compilers of the Philokalia. I think that we could be confident that Madame Kadloubovsky had retained the most valuable material. And it is valuable. If she knew enough to put this in, then she indeed had her eyes open.

This appendix is only four pages, from pp. 412-415, but it provides a key to the reading of Scripture, linking the sacred text to the sacred work of seeking holiness.

Opening with the compiler’s comments, it clearly states that even St Gregory himself took the view that unceasing prayer was the business of all Christians, not only clerical, but also lay. This is not to be expected: part of the logic of Mount Athos and its way of life was that a certain seclusion from the world was necessary. Further, it was standard that the same call could not be made upon the laity as upon monks, and that certain secrets would be taught to men but never to women. I think that in practice St Gregory would have made different demands upon different people. But that is by the way, as it were.

The text then states that difficult as the Prayer of the Heart may appear to be, it is possible, although it needs perseverance. After urging us to work with the body but at the same to pray with the soul, the author quotes Matthew 6:6 “But thou, when thou prayest, enter into thy closet, and when thou hast shut thy door, pray to thy Father which is in secret.”

Note it well, this is the crucial text. Matthew 6:6 “But you, when you pray, enter into your closet, and when you have shut your door, pray to your Father which is in secret.”

The writer then explains that the closet of the soul is the body, and that the doors of the body are the five senses. It therefore means, “But you, when you pray, enter into your body and shut your senses …” The writer then adds:

“The soul enters its closet when the mind does not wander hither and thither, roaming among things and the affairs of the world, but stays within, in our heart. Our senses become closed and remain closed when we do not let them be attached to external sensory things, and in this way our mind remains free from every worldly attachment, and by secret mental prayer unites with God its Father.”

This would be easy to pass over, but it is fundamental, and the method of reading is fundamental. If one just took the earlier part of the text, one could easily imagine that it was teaching that it is necessary to enter some sort of trance state where one is cut off from outside impressions. One reads of things such as “an advanced teacher of yoga who did not realise that a goat was eating her jacket.” And that unconsciousness is held up as a sign of great progress, when in fact it is a sign of great sleep, even of “higher sleep,” the introduction of fantasy into the higher emotional centre. When that occurs, as Ouspensky noted, the chance of conscious development is utterly ended.

The next section is both equally powerful and equally cryptic, meaning that it needs interpretation from the perspective of the practical teaching, thus showing how the applied teaching illuminates the theoretical, and is in fact surer, fuller and more accurate. The author states:

“… that prayer is true and perfect which fills the soul with divine grace and spiritual gifts. As chrism perfumes the jar more strongly the tighter it is closed, so prayer, the more fast it is imprisoned in the heart, abounds the more in divine grace” (pp.413-414).

“This mental prayer reaches to the very throne of God and is preserved in golden vials, sending forth their odours, as St John the Divine saw in the Revelation, ‘Four and twenty elders fell down before the Lamb, having every one of them harps, and golden vials full of odours, which are the prayers of the saints’ (Rev. 5:8).”

How can prayer be “imprisoned in the heart”? It means, I suggest, that one’s attention is retained within the sphere of one’s emanations. It includes the raising to consciousness of the sensory periphery (see the piece by Mr Adie on the formation of the astral body in both editions of the book George Mountford Adie: A Gurdjieff Pupil in Australia).

The golden vials are interesting. A “vial” is a small glass bottle. That it be made of gold means that it has been transubstantiated. Perhaps one could say that, in Gurdjieff’s terminology, the two higher bodies have coated; and in Christian terms, that the soul has been saved (although the Christian teaching extends further than this).

This short extract ends by referring back to the Prayer of the Heart, and the ejaculation: “Lord Have Mercy!”