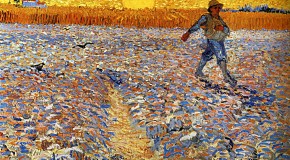 The is an interesting example of how Mr Adie would develop the theme from his Saturday morning address, on the next day, the Sunday. This was said on 22 June 1986:

One of the things which stood out very clearly yesterday, from the observations which were brought, was that what seemed quite small, a small thing, when it was held for a moment, was really quite enormous in its significance. A moment of light, a realisation, or an undoubted sensation. And, on reflection, it contained an enormous significance which one would by no means willingly relinquish. And, on the other hand, things which had seemed enormous and overpowering, seemed to have no weight.

In one minute, I could be borne up, and begin to sense something, and then turn the corner, and it had all gone. Seemingly. Our work is always centred on the question of the immediate now, the only now which is a reality. All our automatic thoughts are concerned either with what is past, or else with what is feared for the future, or what we hope for. And the now is skipped over for either the past or the future, or even sometimes for both together.

Yesterday there was quite a series of testimonies to this effect: several people yesterday brought material, and having brought it, found that it was more important than they had realised. They brought it, but it could be yet more digested and understood. This is where the work is very critical, and demands more control over words and expressions. If I try and remember what happened, I am so passive, that it can come out mechanically. Do I try sense myself as I speak, sense the meaning of the words, or my sensation as I use the words. We found that a lot of the conversation also had to do with the disappearance of words, that there was much which it was very difficult to express in words.

So, the work today is just that. Each one has to have their own plan for the day. That plan has to be related to the aim: without an aim there is no meaning, no goal. Everything is done automatically. So I keep on having to try and return to this aim: sometimes in words and sometimes without words, just to return to the truth of it, the fact that while I cook this food, something is there.

The question of stops was referred to, that they can’t be regularised, and also, if a number of people are working together, if they’re really close, then there is a possibility, but if I see a third person over there, I take the trouble to say we’re having the stop now. But then, with the weaving, where there are a number of people in different teams, it was a question of gathering all the chairs and turning them around, and that is not the way to go about it.

Want we want at the stop is just the willingness, with conscious knowledge of one’s state, to be open. So if I turn like that, I have to be willing to be open, to see and to be seen, to be relaxed and to sense what can pass, what might be in the way. We saw fear, tension, philosophy, hurry, all things which contribute to or destroy this.

I need this conscious centre, because, if I am there, all these different attributes, different influences, different parts of the laws operating tell me where I am and what I need. I am helped to keep straight. We came upon the difference between receiving an impression with some knowledge of it, and being completely hooked at the time of reception. We used, as an example of instability, the toy with a round bottom, and the lead shot in it, and the celluloid or plastic figure, and you push it and it goes like this, you see. This was connected with the word “predisposition.” The reading from Beelzebub referred to this maleficent effect of the organ Kundabuffer, of which the effect was to leave a predisposition. And what is, in fact, a predisposition? In this case, it consisted of a round bottom, so that it has a form, and all our predispositions have a form.

What is necessary, then, if I see that predisposition? I have to know, so that I can receive impressions, and not lose them, but for that I need a sensitivity inside which can accept, understand. We connected that with what Mr Gurdjieff had said that he was standing on his own feet, and had been for years, and maybe very good feet. See? Solid. Standing like that one can be alive and receive the impressions of life.

People came to very useful observations. One thing, and then another thing, quite different, immediately afterwards. But again, if I have no aim, then I shan’t be able to do this work because it won’t mean anything. I cannot come aimless, and the aim I need is a being-aim: what I am going to do and refrain from doing for my being. The only kind of doing which is possible for me is a kind of flashing instantaneous effort, for a moment. That will then last as an influence. Connect the work with your aim for being. Use the bricks, the cooking and all the circumstances to help achieve your aim. If the lunch has been spoiled, then who spoiled it and why? It has something to do with my bad state. If the bricks are put upside down, why? Simply because I am asleep.

This is very different from the group. In the group, I come to discuss my work using the material from life, outside. But here the material comes from a very different condition: controlled, designed, intentional. Years of preparation to provide what we have. When we come here there is a very special possibility. We come into infinite relationship with the others, and who we dislike, and what we have any grievance against. And if that is dominant, nowhere.