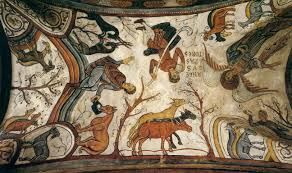 There are the final questions from the meeting of Thursday 5 July 1979 with Mrs Helen Adie.

Teresa said that she had been trying to listen, during conversations with people, to what they were saying, and not be too anxious to get her own opinion in.

“Yes”, said Mrs Adie, “first of all, feel your presence and you can receive what they’re saying. You can even hear it, and take it in. But if the effort is not to speak yourself, then something interferes. That sounds more like trying hard to control, rather than be present. Don’t try not to speak. Try much more to be open and listen. It’s a very good thing to do, yes, one can’t go too wrong”.

“So I should keep my attention on the other person?” asked Teresa.

“Your attention has to be divided between yourself and your actions. You can’t do it without a certain amount of feeling of your own presence. You can’t. It’s impossible. That’s what really was missing in your report. You had that idea in your head of not saying your piece, but too much attention was on that, too much doing. Try to see your life. It needs very little attention, actually, to hear what people say.”

Then Will said that he had been working for the last three weeks to try and catch himself when he hesitates in speaking. He had come close a few times, had felt his stomach relax, heard his words echoing in my chest, sensed the sensation of his face, and  had spoken “with complete control”. But, he said, “that’s not really what I want. I want to try to catch it right on the instant that it happens.”

“That is very, very illuminating isn’t it?” remarked Mrs Adie. “Continue the same way, until you see what is happening. It can get very interesting. It is connected with your state in that your state can influence how you speak, and why you might hesitate in speaking. But I suspect that you will find that when you are sufficiently present to see how you speak, and how you hesitate, you will also be in a state where the factor which causes that hesitation doesn’t refer”.

The final question of the evening was from Shirley: “I’m wondering about what you said before. As you said before, I want to be able to think without words”.

“Not quite. Now you are putting into your own words what I said, and it is not the same. What I said was that your head can be empty of words, but your thoughts are still engaged”.

“How can you have thought if there are no words?” asked Shirley.

“Sometimes your attention is attracted to an object because you’ve deeply interested in something.  Not all thought is formatory. There are higher levels of thought. In one, much higher level of thought, your attention is attracted to it. Then some of the time you have to study something which is not the slightest interest to you but you have to learn it. You can’t do it with the formatory apparatus, maybe, you learn a lot of names like a fact, but you can’t learn it and understand it with your formatory apparatus. You have to oblige your attention, you have to direct it and that is a higher part of your thought. It’s a question of attention. You can interfere with it by thinking useless thought. But that isn’t the thought you need. No”.

“An effort, a sufficient effort is required to think, but don’t get tied up in those words themselves. You’ll find your attention with a question. Of course it has to be expressed in a word. The words have to be found, they don’t often just come bounding out, and even formatory centre has different levels. There’s not a sharp dividing line between all the centres, or between the parts of centres. Thought is relative. It can be higher or lower. Every part of our centres depends on the quality of attention”.

“But I understand your quandary. I understand it very well. Everybody finds it a great effort to think and a great disinclination to do it simply because I feel some don’t know how to do it. It’s quite true. It’s a kind of effort that we’re not familiar with … it can’t be explained. In a way, you have to find it yourself. We have to use words, we have to. They’re the most available symbols we have”.

After a pause, Mrs Adie added: “You have yet to find the difference between a higher and a lower part of your thinking centre in your own experience. You are sometimes in a much higher part, but you don’t necessarily know it”.

“What will stop you is worrying about how to get there. You know t your attention must be very much more concentrated, but for that you need to make a relaxed effort for your state, not for your thought. Your attention must be much more concentrated. You can get so terribly involved in your head with this question of how to do it, that it can take you away from the effort itself”.

“Is it like when you do a mathematical problem and you sort of stare at it?” asked Shirley.

“There is a quality of attention which can be free. We live in the lowest parts of our centres nearly all the time. You’re beginning perhaps to not fight so much, or beginning to be more aware of the situation. Your attention is your only weapon. It’s the key to everything. Your attention. Your will and your effort can give you more than forcing your head can.”

I will make just three short points on the exchange with Shirley. First, in one section Mrs Adie advises her: “And if your attention is there, ideas will appear”. I would say that it is similar to just opening your eyes. Shirley’s question had a sort of fear behind it, as if were she not trying to think, no thoughts would appear in her head. Mrs Adie says, on the contrary, that it is precisely when we are not forcing our heads that higher level ideas can appear. There is no more need to try and produce ideas than there is to produce visual impressions when we open our eyes. The effort is to be present and collected, and let impressions, and real thoughts, to enter.

Second, as Mr Adie said on some occasions (and also Bennett in his little book Creative Thinking), the best way to obtain fresh thoughts is often to reject those which are not of the standard we want. Clearing the decks often allows the higher thought, which is always there, to appear and be recognised by the lower faculties.

Finally, I was intrigued by this comment of Mrs Adie’s: “You have yet to find the difference between a higher and a lower part of your thinking centre in your own experience. You are sometimes in a much higher part, but you don’t necessarily know it.” It is undoubtedly true. But why should that be? I may be wrong, but it seems to me that it might be because when we are in the higher part of our heads, something in us identifies with us, and says to itself: “I am always like this, or at least I always can be. I am so brilliant!” But the thing is to see it, rather than to conjecture. Really, what we had in the Adies, we did not appreciate.