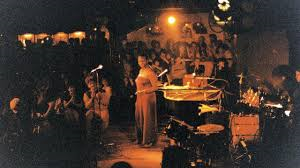 Nina Simone (1933-2003) was not an ordinary person. She was not. I wish I had time to do justice to her achievement, but she was talented to an extraordinary degree. She was, indubitably, one of the most brilliant performers of modern times, but at times there was something in her voice which was of a higher level than anything which could be due to artistry or talent, no matter how highly developed. It was her being: there was something about her being, at least at moments. To understand what I mean, I would recommend that you listen to her singing and arrangement of “He’s Got the Whole World in his Hands”, from the 1959 album Nina Simone and her Friends. I once put it on for a good friend of mine, a man who is not exactly predisposed in favour of any non-classical music. But he listened to it honestly, and he was astounded. After a period of silence, he said: “I didn’t know there was music like that.” For now, I will just look at one song of hers: “God, God, God” from the 1987 album, Live at Ronnie Scott’s.

Ronnie Scott’s is a London jazz club. I believe that this recording was made in 1984, although it was not released for several years. The lyrics are taken from a poem by Paramahansa Yogananda (1893-1952, see the link below). She begins by following his words quite closely, but as time goes on, she alters them. The words she added are in round brackets ( ), and those she omits, in square [ ]. She omits one entire voice. I have not marked repetitions. You expect a pause at the end of a line, but her delivery is startling. I use three stops to show the unexpected pauses. The words are these:

From the depths of slumber
As I ascend … the spiral … (staircase) [stairways] of wakefulness
I (wish for) [will whisper]:
God! God! God!

Thou art the food, and when I break my fast
Of nightly separation from Thee
I [will] taste Thee, and mentally say:
God! God! God!

No matter where I go, the spotlight of my mind
Will ever keep turning on Thee;
And in the battle din of (all of my) activity, my silent war-cry (is) [will be]:
God! God! God!

When boisterous storms of trials shriek
And when worries howl at me
I will drown their clamour, so much noise, (dear God)

(So many people talking about, all around me, all about me, all over me) [noises, loudly chanting]:
God! God! God!

(No matter where I go, the spotlight of my mind
Is ever turned on Thee;
And in the battle din of all of my activity, my silent war-cry is ever:
God! God! God!) x 2

When my mind weaves dreams
With threads of memories

I suggest you not only listen to the recording, but also watch the performance. It is readily accessible on Youtube. You will see what I mean. And then, having had the impression of how she was as she sang, the experience of hearing the CD will be enriched.

I will just make some short notes: first, as she sings the opening verse, “From the depths of slumber, as I ascend the spiral staircase of wakefulness …” she does so. She ascends. Second, the piano accompaniment is very simple. That simplicity is the backdrop for the direct lyrics. These words are deep. They can teach us something without lecturing. Anything more complex would distract from them. Finally, it is good to listen to the entire album. The only track I don’t like is Mississippi/Alamamba. But something of the spell of “God, God, God” is woven over the two tracks which follow, and “If You Knew” and “Mr Smith”.