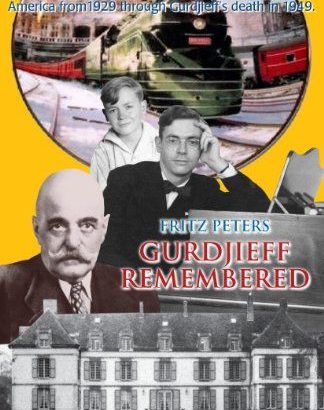 I have Fritz Peters’ books Boyhood with Gurdjieff and Gurdjieff Remembered as part of the one-volume edition titled My Journey with a Mystic. Mr Adie, who knew Gurdjieff and had met Peters, but had not himself been at the Prieure, said that he thought much of what Peters had written had been accurate, at least in outline. He had an intuition that some of the details might have been exaggerated. This seems correct: I have been told by people who knew Peters better, and in particular, knew others who had been present at certain incidents, that just as Gurdjieff sometimes elaborated on stories which were too good to be told with the plain details alone but lacking no salt to bring out the flavour, so too did Peters – most notoriously with the story of the Chicago train trip. Yet, Mr Adie said that he could hear Gurdjieff speaking in Peters’ books, and that was high praise indeed. There is one particular theme which Peters averts to which I do not remember to have seen anywhere else: that of good and evil in man and the need to balance them by and through conscience. There are similar and analogous records, but nothing quite like this.

The first passage is quite long, so I have made excerpts from it. Gurdjieff has Peters consider how many acorns there are on an oak tree, and how few become full grown: “Must learn from Nature. Man is also organism. Nature make many acorns, but possibility to become tree exist for only few acorns. Same with man – many men born, but only few grow. People think this waste, think Nature waste. Not so. Rest become fertilizer, go back into earth, and crate possibility for more acorns, more men, once in while more tree – more real man. Nature always give – but only give possibility. To become real oak, or real man, must make effort …”

“In west – your world – is belief that man have soul given by God. Not so. Nothing given by God, only Nature give. … Man can become many things, not just fertilizer, not just real man: can become what you call ‘good’ or ‘evil’, not proper things for man. Real man not good or evil – real man only conscious, only wish acquire soul for proper development.”

“… Think of good and evil like right hand and left hand. Man always have two hands – two sides of self – good and evil. One can destroy other. Must have aim to make both hands work together, must acquire third thing that make peace between two hands, between impulse for good and impulse for evil. Man who all ‘good’ or man who all ‘bad’ is not whole man, is one-sided. Third thing is conscience; possibility to acquire conscience is already in man when born; this possibility given – free – by Nature. But is only possibility. Real conscience can only be acquired by work, by learning to understand self first.”

The second passage is on p.122. It comes after Peters has described how Mme Stjoernval (Schernvall), who had been a good friend of his recently deceased wife, had been embittered when Gurdjieff raised money by pawning her earrings with a promise to redeem them, but had apparently reneged. She made things so hard for him that he had to go to great lengths to retrieve them, since the man to whom they had been pawned had died, and a rascal had come into ownership of them: “You remember … how I tell about good and evil in man – like right hand, left hand? In other sense, this also true of man and woman. Man is active, positive, good in Nature. Woman is passive, negative, evil. Not evil in your American sense like ‘wrong’, but very necessary evil; evil that make man good. Is like electric light- one wire passive or negative, other wire active, positive. Without two such elements not have light. If Mme. Schernvall not evil for me, perhaps I forget promise, serious promise, I make to her. So without her help, because she not let me forget what I promise, I not keep promise, not do good for my soul. When give back earrings I do good thing: good for me, for memory of wife, and good for Mme. Schernvall who now have great remorse in heart for bad things she say about me. This important lesson for you.”

On p.127, Peters is reflecting on Gurdjieff, and writes this: “One of the unforgettable things he had said, and he had repeated it many times, was that what he called the “good” and “evil” in man grew together, equally; that man’s potentiality to become either an “angel” or a “devil” was always equal. While had had spoken, frequently, of the necessity to create or acquire a “reconciling force” within oneself in order to deal with the “positive” and “negative” or “good” and “evil” sides of one’s nature, he had also stated that the struggle, or “war” was never-ending; that the more one learned, the more difficult life would, inevitably, become.”

The importance of this can scarcely be overstated: it clarifies so many of the questions I have wrestled with on this site, especially those to do with repairing the past, and achieving peace with ourselves. I might put it like this: we have all done things we are ashamed of. We cannot unmake them. But we can unmake and remake ourselves. And we do this by understanding that we have in ourselves, willy-nilly, both good and evil. We must, now and always. In itself, that is simply a fact, the fact of the human condition. We waste too much time and energy hating ourselves and others for our human condition. It is better to face it, impartially, and to evoke in ourselves conscience. That is, to awaken our feeling of ourselves, our love of reality and being. Perhaps when that feeling animates me, I can contemplate reality with something like joy. I can contemplate, soberly, the fact that I will always be responsible for both my left hand and my right.