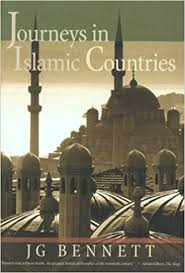 I have already mentioned that, together with some friends, I have been planning a serious book on J.G. Bennett, written to traditional academic standards. As part of my preparatory work, I have read his Journeys in Islamic Countries, Bennett Books, 2000. It was posthumously published in two volumes in 1976 and 1977. It is, I think, a minor masterpiece.

It is Bennett’s travel diary, a diary written between 22 September and 4 December 1953, and reprints Elizabeth Bennett’s introduction to the earlier edition. She states that it was written specifically to enable his family, friends and pupils at Coombe Springs to participate, by long distance, as he travelled Asia Minor and the Middle East, posting it back to them in instalments. It was some fifteen years later that he thought that, together with notes drawing on later experiences, it could be published (page 5). His son, George, adds some further context, including most importantly, that part of his purpose was to “find the sources of Gurdjieff’s teaching” (6-7), and concludes: “In Journeys in Islamic Countries, we see Bennett stepping towards a key element of freedom: the freedom, finally, to work without a teacher, and to take responsibility oneself” (7). Another purpose of the voyage was to study the “dimensions and general designs” of tekkes and meeting places, as preliminary research for building a hall as Coombe Springs (5).

Hence, taking all of these details into account, it is significant that on the last page, JGB wrote: “As we flew over Pergamon … I asked myself what is the chief lesson I have learnt in these eleven weeks. Rather to my surprise, I found myself saying that the most important of all is the realization that work means being in the Presence of the Higher Consciousness; and the respect of that presence is what we must cultivate chiefly and most urgently. Without that feeling of reverence, the work can have no momentum to carry it over the inevitable lapses of consciousness” (237). I may yet revise my opinion as I study JGB over the next years, but I suspect that this insight retained its truth for him. If I can say so, I sense a truth in this, and I can relate it to my increasing understanding of the critical significance of the Four Ideals Exercise. But to return to the pages of this volume.

The nine chapters appear to be the nine instalments JGB posted back to England: they take us from Turkey (Konya and Adana), to Syria and Damascus and the teacher Emin Chikhou (a Kurd living in Damascus), to Lebanon and Jerusalem, thence to Baghdad, Babylon and Ur, Mosul and Amman (in Jordan), Aleppo and the Mevlevis, Turkey, then towards Kars and what is called “Gurdjieff’s country”, and finally to Turkey and home. It is quite readable, and quite accessible, although the depth of the ideas is challenging in many places.

Being diary notes taken down while in transit, much is necessarily reduced to the most concise formulations, tacitly inviting the reader to conduct their own researches. Few, I think, could read this and not ponder travelling to Turkey and Armenia. But that is not the point, I think rather that the point lies in the spiritual work; and that is what we shall address. I should, however, add that secondarily, this reading is an encounter with a powerful intellect and a relatively balanced and developed being. Although Elizabeth says that people who knew the later JGB will find the figure in these pages lacking the broad compassion and understanding of his later years (5). She would know, but he was, nonetheless, an estimable man in 1953.

What is most important in this volume, bristling in insights? Perhaps, for me, it was something around the mystery of the work, which co-exists with the palpable reality of it. How to reconcile these? It might be ideal to harmonise the mystery and the reality in life. It will be a life in which the work of higher centres touches and illuminates the lower. I relate that to these two key passages, both near the end of the book.

First, on one occasion, when reflecting upon a week of “fruitless journeys”, JGB realised that: “Although I had neither seen what I wanted, nor been where I decided, ‘I’ was not at all disturbed by all this. The only question that ‘I’ am concerned with is the ability to keep my inner state” (216).

Second, as “I looked over the sea toward the sun, I thought to myself that whenever, on these journeys, I have done things for other people, they have gone well, but when I have wanted something for myself, it has usually eluded me. I felt an impulse of love toward other creatures, and prayed that it might always be so with me. I saw how a normal existence on earth is possible only if people will set themselves first to be useful to others an not look for benefit for themselves. All human existence would be transformed if such a simple rule could be accepted as a basis for life. There are many who would gladly accept such a rule. I know many in our own work who have such an impulse, but we spoil it by our self-love or self-pity” (228).

There is a reality about both statements: he found a fact, in the first one, about real I. Yet the mystery subsists: what does it mean to “keep my inner state”? Can that be done without engaging in the common domain of life? This first passage is not actually so very different from the second, I think: that impulse of love comes with real I. Surely this is so. And it is also true, as Gurdjieff said, that it is necessary to first be a good egoist. It is just that a good egoist will be striving to be accessible to the promptings of conscience, and to realise something of that love which JGB mentioned.

What has to be stated in a given order, so that the intellect can accept it, also has to be felt all together and at once so that it can be lived, and this, I suspect, is a function of higher emotional centre.

Further, the second insight, from p.228, resonates with Gurdjieff’s epitaph for his father: “I am thou, thou are I; He is ours, we are both his; So may all be for our neighbour.” Observe that the first words are “I am.” I find that, at least for me, this connects the two statements, and shows why for me they make the entire volume memorable. Then, pondering Gurdjieff’s epitaph, it struck me for the first time that perhaps the “all” in “so all may be”, may actually refer to being: BEING is one, and my being, your being, and that of our neighbour are, accordingly, law-conformable members of the One Being. Perhaps only the function these members have in the Whole, the part they can play, depends upon our conscious work.

But the mystery of the work comes through so strongly in this volume partly because, as Bennett says several times, he followed Gurdjieff’s advice to put himself in an unusual situation where he could not simply fall into an accustomed role. The very fact that he was journeying in these lands helped him remember himself, and made possible the realisations this book faithfully records. I will note, and perhaps return to it later on, but the idea of a journey for development of being as important in the Ancient Near East and even in Greece.

We have only begun this study. To be continued.