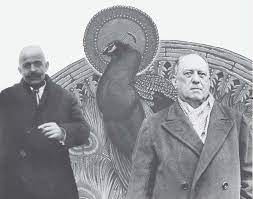 It begins by asking whether one can satisfactorily define the words “esotericism,” “occultism,” and “magic”? That discussion is fairly technical, but I said that “Esoteric” and its derivatives first referred initially to disciples, while “occult” first meant discovering the real but hidden property of a thing or phenomenon. “Magic” was a subset of both terms, but could not be used as a satisfactory substitute, although it was closer to the “occult” than to the “esoteric.” This is because the occult has to do with being hidden, “while esoteric is not so much hidden as inner: what is inner may not be secret, yet be demanding of attainment, like the peak of a mountain.”

I considered esotericism in the New Testament, where it coexisted with the demand that faith be “widely and vigorously disseminated,” as in Matthew 10:27. I concluded that: “the esoteric elite are obliged to share their learning, despite persecution.” Further, the movement of truth is from the esoteric to the exoteric. I also looked at those words in Western esotericism, especially in H.P. Blavatsky, and in P.D. Ouspensky’s A New Model of the Universe. In his interpretation, esotericism occupies an important position in Christianity, and the chief place in the Gospels. I also looked at Frances Yates, who related magic to the occult and to theology of a certain kind. James Webb developed some of her ideas, and saw The Theosophical Society as a “prototype occult society,” illustrating his view of occultism as a “flight from Reason.” To his great credit, Webb noted that much occultism, including Blavatsky’s Theosophy, had a significant racial component. I shall be returning to this in future research, as it is one matter which differentiates Gurdjieff from Blavatsky and especially Steiner.

After a consideration of modern scholarship, I suggested a need for a “differential diagnosis,” that is, a way of distinguishing similar concepts, and that, as between “esotericism” and “occultism,” the differential standard is an openness to alchemy, astrology, and magic. I then introduced my case studies, G.I. Gurdjieff and Aleister Crowley. A lot of the research on them is not up to scratch, and I took as examples a few modern scholars. I therefore, set out what Gurdjieff did say about esotericism. Very important is Gurdjieff’s statement to Ouspensky about the four principle lines of knowledge, the Hebrew, Egyptian, Persian, and Hindu: “the theoretical statements which form the basis of one line can sometimes be explained from the point of view of statements of another line and vice versa. For this reason it is sometimes possible to form a certain intermediate line between two adjacent lines. But in the absence of a complete knowledge and understanding of the fundamental lines, such intermediate ways may easily lead to a mixing of lines, to confusion and error. In addition to these there are two lines known in Europe, namely theosophy and so-called Western occultism, which have resulted from a mixture of the fundamental lines. Both lines bear in themselves grains of truth, but neither of them possesses full knowledge and therefore attempts to bring them to practical realization give only negative results.” In Search of the Miraculous, 285-286. I concluded that Gurdjieff could be seen as a mystic, even an esotericist or a magician, but not an occultist – and certainly not in his own terms.

Then I came to Crowley. I actually read almost everything he had published – I did not read his diaries, but I did make a study of even his early poetry, his novels, and his “rituals.” I said that: “A striking aspect of Crowley’s career is that he managed to accomplish and write what he did in the face of a particularly imposing obstacle, a foe more bleak and forbidding than Kangchenjunga; his own self-destructive impulses. … Even sympathetic commentators describe his “inner duality” and contradictions. When speaking of Crowley, “contradictions” seems mild: something like “antagonisms” seems called for.” I noted his obsession with Jesus, and his “Messiah complex.” I cited texts to show that: “Overall, the impression is that he wished to project an image of respecting Jesus but not Christians, when in fact he despised both.” I noted that: “Lust was a consistent aspect of Crowley’s mind, all the way from Aceldama, through to the diary notes of his yearning to force the attentions of the resolutely heterosexual Cecil Russell.” I concluded this section by saying: “… no good purpose is served by studies of Crowley which underplay when they do not ignore his sexual obsessions and his writing of some fairly elaborate pornography.”

Crowley’s approach to magic was personal: he aimed to identify magic with himself. He declared that he was in possession of secret knowledge, and was aware of the paradox of occultism, that once the hidden teaching is imparted, it is not hidden, or at least is not hidden in the way it had once been. Oddly, his understanding of “magick” was without horizon: “the Science and Art of causing Change to occur in conformity with Will.” His ideas blurred the distinction between magic and anything else. His definition lacks helpful limitation. Pasi realises that the “definition” fails, but asserts that Crowley “usually had in mind a rather precise set of practices and ideas, based mostly on traditional ceremonial magic.” This, I say, is merely circular: “Magick is the Science and Art of causing Change to occur in conformity with Will by magic.” I concluded that Crowley tacitly held that true knowledge and wisdom were the province of magicians or adepts, who would convert the world to a new religion. That Crowley favoured the terms “occult” and “magick,” as against “esoteric” supports my contention that there is a real difference in nuance between these words, and that “occult” is a better word for those who use, whether exclusively or not, magic, astrology, or alchemy.

I then argued that the differences between Gurdjieff and Crowley were greater than their similarities: “Gurdjieff was fundamentally a mystic, who taught an entire intellectual, emotional, and physical discipline … In so far as Crowley’s mysticism was ever realized in practice, it seems to have mainly depended upon drugs and “sex magic” …” I expanded on this, and criticised some modern attempts to say that Gurdjieff and Crowley had something in common. Incidentally, I set out the passage in Web where Gurdjieff expels Crowley from the Prieuré. I noted that Merston had said that Crowley was the only person Gurdjieff ever expelled. Since I wrote it, a person whose opinion I respect, has told me that he thinks Michel de Salzmann may have been the source of the story. If this is right, then perhaps Michel was one of the children whom Gurdjieff had told to ignore Crowley.

There is a good deal of interest in the article, even if I say so myself (and I do). It was over 17,000 words. But please do not ask for a copy. You have to obtain it through Correspondences. I am pleased they saw fit to publish it after peer review, and I have to keep faith with them.