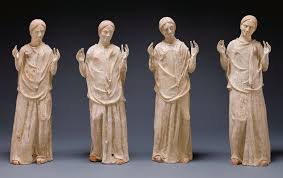 This is from the morning address of Sunday 30 April 1989. The morning’s reading and those of the day before had been from the chapter “Beelzebub’s Opinion of War.” I had thought of trying to interpret what Mr Adie may have meant when he spoke about how taking care for our speech at one level makes possible a higher communication over and beyond the words and the speaking. But in the end, I felt it better not to distract from his simple insight.

Mr Adie:   Yesterday, when we came to try and appreciate innerly what we’re about when we’re sitting here, how to relate our work on the Saturday to what had been read, it was generally appreciated that, following the reading, which very powerfully related how one effort after another failed, one principle after another was lost, one thing which could have given some gain, disappeared, until everything fell away, and the result of all this objective vision of things rising up and then disappearing, and rising up, and then disappearing, the effect of it all was to produce a feeling of nothing left.

For us, we are in a special position, and as that was shared quite a bit, quite a few around the table shared it, it gave a fresh possibility because we are left with the question: “What is left?”

The only thing that is left is something which eventually could become I, an authority, a responsible. And the power of the writing and the repetition of it, and the time that had past, produced this thing and the result was that during the day, trying to recollect this key to the approach of freeing oneself from all the mutiny and triviality and nonsense of ordinary life, it was as if some of us really had felt the idiocy of it, the likeness, the rubbish. As a result, came a flash occasionally of great simplicity, that is to say, their compulsions, their negative feelings, their reactions were seen and fell away, and they were free to relate it: to come here and just give that account of what happened without the usual considering, tension, fear, which prevents them from speaking. Then, the second step which allowed them to speak simply without magnified, there’s no need to magnify, these various springing up impulses of resentment and hurry and tension and negative feeling, these were expressed very simply.

There was a general movement, some kind of communication between us so that one was free to look around without any sort of wondering. Just here, just as we are now, free from that slavish rubbish that prevents me, and steps in between me and anybody I see, and to be present and the requirement of the presence. What is required? The fact that every second gives me life, as a gift, and it also requires something: if I don’t understand enough, I don’t receive the gift, it just passes. Again, I serve great nature, dust to dust, ashes to ashes, and that’s it.

This morning the reading was a continuation, but it was related to these special different forms of idiots that cropped up in the power possessing positions called, you remember, aristocrats, bureaucrats, zevrocrats, democrats, and so on, aristocrat. And why they failed and what nonsense it was, it’s a continuation but yesterday it was extremely powerful in that effect. It was so powerful that when I finished reading, I said, it would be nice to go on and people agreed. It showed an awareness of the realisation that this must have been, this is how it takes place. I bring it because, this is, a lot of us were here that were here yesterday, and yesterday in a way was a preparation for today, so if we can go on from that we have that help.

How can we arrive for momentary, repeated moments as often as possible, of relative freedom? We have to see many things, people related quite idiotic things, that people would normally consider very much about and hide, doing anything to hide such impulses in them. But they were free, some of them, to mention these things, and mention them simply without a lot of padding and getting extra kudos for mentioning them – speaking just like that.

A human being, in the light of everything, is an incredibly important possibility. A real human being with human feelings and intelligence and control and choice in his emanations, is the element in the creation which ascends.  And what is our individual relation to that? How can it become real? It can only come real for a second, a flashing second. But there can be more, there can be a recollection of it. There is this wave motion possible.

The concept and the fact of language became important in our discussion. We mentioned how everybody, probably everybody at times, instead of having something precise and chosen and starting from themselves to speak, will blurt something out, the first two or three words are just a sort of blurting. So, there’s no start, there’s no real point, so that one cannot say, the course from goes this, because it’s all blah, blah, blah, like this you see? And many people spoke like that, and from that we tried to get a net impression, someone speaks, it must be, I who am speaking, my experience at a time, at a place. Without that, we can’t talk. If we do that much, then other elements enter which can’t be expressed in words, but which are present, and which pass through higher communication. The language of signs, all signs are going on. Everybody is manifesting signs of their state.

And wherever I look, I look at you, we look, we all look together, if we could see, we could tell the state of another. But for that, I would have to know my own state – and do I? This is my first charge – to know my state. If I don’t and I hardly do – I have no choice at all. Because what choice have, I got if I don’t know where I am? I may need to go back, I may need to go this way, even if I think I want to go there. It has to come here you see, we have to collect ourselves and the key thought of the whole thing was, that the first importance is I, myself, this is the one important thing. But not that horrible egotistical imaginary creature, something at least becoming freer. At least becoming human.