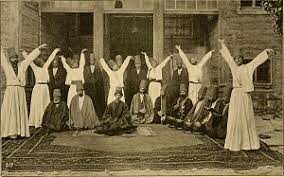 Several people have said to me, over the years, that it is either pointless or wrong to discuss Gurdjieff: he is simply beyond us. First, I think that it depends upon the quality or level of the discussion. I would agree that if the conversation is of a formatory level it would be useless or worse. But, in itself, that is only a reason to strive for a higher level.

Second, Gurdjieff inserts himself in each of the three series of his writings, especially in the second and third. He says things about himself in the group meetings. This means that it is impossible to have no idea of Gurdjieff at all. If I say that Gurdjieff is beyond us, then I still have an idea or image of Gurdjieff: namely, that he is “beyond us.”

I do not believe that this is an intelligent attitude for students of Gurdjieff’s system. An inchoate and cloudy notion is a liability, especially when the man himself has proved so controversial in the literature, and (as mentioned) Gurdjieff says so much about himself. It should be possible to formulate a clearer image, which will be of more value to us. I attempted to being something in that direction in this post http://www.josephazize.com/2022/05/28/the-changes-in-gurdjieffs-life/

That is the first thing: we can avoid the discussion, but we cannot avoid having some image of Gurdjieff.

I have said that I think the really important question is not “where did Gurdjieff find the system?” but “how did he develop his being?” If we take that as a possible point of departure for just one moment, then it places the developments in Gurdjieff’s teaching in a different light: we see him developing his system as he himself developed. This is why a little bit of time with him in 1949 was worth more than longer exposure at other times.

This perspective immediately does away with two ideas which I think misconceived: first, that he disowned the teaching he gave Ouspensky; second, that all he was doing was adapting his methods to different situations.

On my view, the only thing he disowned was Herald of Coming Good, and as I have said, I consider that little book to have been written when he was at the most unbalanced stage of his adult life, i.e. lacking in judgment as to what should or should not be said. But as is shown in an unpublished memoire of Diana Faidy, he himself was able to recognise this.

Gurdjieff did not disown the teaching he gave Ouspensky, and the idea that he did not teach the ideas in In Search of the Miraculous is absurd: he himself ordered its publication, and said – for the most part – that it was very exact. Mr Adie remembered that Gurdjieff himself had been warm not only about that book but also about Ouspensky himself, as a result of his reading of the transcript. When one of his pupils said to him that she could teach his movements but not his ideas, he told her to take In Search of the Miraculous and to read one page each day, and put into one sentence what she found to be the most important idea on it.

But this does not mean that his being did not develop: I believe that it did. He had done the work needed to present the ideas in as systematic a way as is possible with these ideas, and now he wished to find what means he could to introduce the ideas into the life of people as a practical influence. This was far harder than the first part, and, I think, he succeeded when he began to formulate the methods of Aiëssirittoorassnian-contemplation. So it was not a question of disowning an earlier teaching; it was a question of searching for the practical methods needed to perfect that teaching.

It is not essential to my hypothesis, but I think that the car accident of 1924 obliged Gurdjieff to accept that his greatest need was to balance himself before he could return to the sort of public activity he had been engaged in. The path he chose to balance himself and to honour the interest he had already aroused in his ideas, was to produce three series of writings, and music to assist in its assimilation. Then, as he neared balance, he introduced Aiëssirittoorassnian-contemplation. Note, too, that as I have shown in my book, this concept was added to Beelzebub after the Orage edition of about 1931. In my forthcoming study on Bennett, I provide overwhelming evidence that the exercises were not taught to Orage and Toomer, and therefore were almost certainly not being taught at all.

This thesis also helps to explain why Gurdjieff became more overtly religious. I think that he realised that the teaching, as he had brought it, would strike many good people as being rather cold. The idea of working on oneself would not, by itself, inspire many people to persevere. And inspiration is, I suggest, needed. The incorporation of the more religious elements provides more of a reason to live and to die. After his death, his main pupils moved further in just that direction. Ouspensky and his wife, Nicoll, and Bennett, were, I would suggest, good examples of this. Even Jeanne de Salzmann’s “energy needed for the planet” was something like this.

For me, this perspective on Gurdjieff is rather encouraging: if even the remarkable person we meet in In Search of the Miraculous needed to re-balance himself, we have no right to despair when we find the path forward hard: it is hard, and our experience may be objectively correct (at least in this respect).