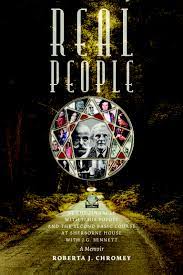 Review Roberta Chromey, Real People: At The Pinnacle with Irmis Popoff and at the Second Basic Course at Sherborne House with J.G. Bennett, a Memoire, Red Elixir, NY (2022) 336 pp.

This is a valuable memoire, although it aims at being more than just a memoire or series of recollections. Chromey was a student of Gurdjieff’s system (his ideas and methods), meeting and learning from a number of his personal pupils: Popoff, John and Elizabeth Bennett, Pierre and Vivien Elliot. However, it is not a sort of collection of “sound bites.” The significant thing is the inner work, and that comes through loud and clear.

When I say that it aims at being more than a memoire, I mean that Chromey clearly intends to produce a record which people can use for their own work; hence, her use of some of the published books when indicating what Bennett said (or would have said) on occasions; and especially her notes about the movements and the exercises.

It is like a log from a sea journey: those who were also on the trip will find it prompts them to remember, while for those who were not, it is more of a travelogue. This book, I think, is meant to be an instructive travel diary, taking as its theme the journey from birth into whatever our destinations may be.

To take but one example: the ablutions discipline. She says something of what she learned from Popoff, and of how it different from what she learnt from Bennett. For that reason alone, it would be a valuable resource. But what comes through more even than that is the value of this much under-rated discipline. Having spoken to a number of people who were at Sherborne, it seems that they often just “forget” to use that discipline. I can understand that, it is after all, hard to wash yourself with cold water in cold weather. But then, what one can receive from it makes the discomfort worthwhile.

It is also valuable for saying a little about Irmis Popoff who clearly was an estimable person. I hope that someday more will add their recollection of working with her, and someone will write about the Elliots. The little I have read about them gives little away. But I have been told some things about Pierre which are quite impressive.

My own study of Bennett has been completed and is with a publisher, being considered. I shall post news of its progress from time to time. But until then, with Bennett’s own books, and with volumes like this and Allen Roth’s Sherborne, it is a good time to start to understand what it is that Bennett brought, and why he has been such a massive influence in the lives of people who knew him, and also why he was so controversial. I will keep my fire dry on these points, as I say a good deal more in my book.

If you have not read much by Bennett, I would recommend Witness, then A Spiritual Psychology, and then Hazard, in that order.